Staged on Oct 27, 28, 29 and Nov 3, 4 and 5 at the Oscar Peterson Hall, this production has gone through 3 iterations that began with a performance in the Champlain College (St. Lawrence Campus) cafeteria about 4 years ago. It had a 3-day run – mostly in the form of a play – and then in March 2016 was presented twice at the Palais Montcalm in Quebec City featuring a reworked musical score with choir and soloists. And so it arrived here at the Oscar Peterson Hall with 6 performances last month. 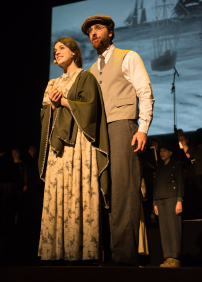 The idea of telling the story of the plight of the thousands of Irish that fled their homeland in the late 1840s (mostly in 1847) in a play/musical form was hatched by Hubie Radoux, John Halpin, and Margaret Forrest quite a few years back and was pulled into shape by these folks. It is a sad and difficult story as so many of the Irish suffered terribly not only on the “coffin” ships that brought them to the small Island of Grosse Île but consequently at this quarantine station and later when they were brought to Montreal.

There were good solid audiences at Oscar Peterson Hall and the night we were there Brian and Mila Mulroney were in attendance and seemed quite delighted. Brian was the productions’ patron.

After seeing this show three times in three different locations, I can say that it certainly gives us all a very powerful feeling of the destitution and misery of the immigrants along with a portrayal of their solid faith in their God and religion which helped many get through the ordeal or succumb to their fate without rancor.

Some of the soloists were of high caliber and the choral group performed well. A complaint that I heard from many people was that the show, in parts, was not easy to hear as no microphones were used. Microphones were used in the production in Quebec. As well, some comments focused on the fact that this work was not really a “musical” but more of a cantata and that it lacked humour  – too many funerals! I tend to agree. There needs to be some more up-beat music and a few laughs in spite of the fact that the situation was indeed dire.  For example, the children’ roles could have included playing games and singing. Perhaps another tweak in the overall structure is in order to boost this to the higher level it deserves.

Of great value here is the education the production gave to many people in Montreal – including the Irish Diaspora. Many of us have had our eyes opened to the importance of the Irish famine in the history of Quebec and Canada. It is a story worth hearing, and this team of artists has done us a great service in bringing it here for all of us to see.