The Parthenon of (Forbidden) Books 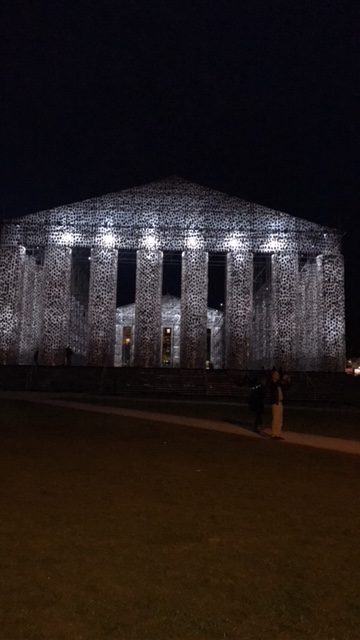 The Documenta is an important series of contemporary art exhibitions. It takes place every five years and lasts 100 days. It is also referred to as a museum of 100 days. The first Documenta was held in 1955 and went back to the initiative of Arnold Bode. The location of the Documenta is usually Kassel, Germany. 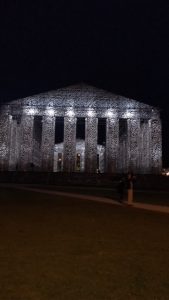 This is what the structure looked like at night. Each of those dark spots on the building is a book shrunk-wrapped in plastic.

As part of the art fair Documenta 14 held in Kassel, Germany (10 June – 17 September 2017) and Athens, Greece (8 April – 16 July, 2017) the Argentinian artist Marta Minujín had made to be built in Kassel’s Friedrichsplatz a 1:1 scale version of the Athenian Parthenon. But rather than stone, this Parthenon would be made of linked and bound steel tubes which produced an aery silhouette version of the original edifice.

The new structure would be used to hold 30,000 books shrunk-wrapped in plastic and suspended on the struts. The books chosen were titles which at some time or place had been suppressed or censored. It was the Parthenon of (Forbidden) Books.

In September, my wife Sharon and I were in Kassel for several days to visit Documenta. We walked through this Parthenon of Books one evening and found it visually striking and poignant. The banned books in their plastic envelopes represented a terrible history of literary oppression and destruction. Historically, book burnings have been held on this very site.

There was no order to the collection and several languages were represented—English was certainly in the minority. The books had been donated by individuals and publishers and with some titles there was a lot of repetition. We looked for a copy of Ulysses (that “most dangerous book”) but never found one—though we were assured later that it was indeed there. 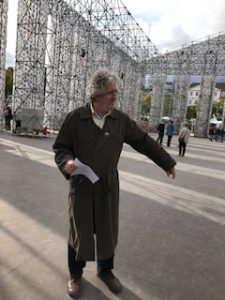 Here I am performing a passage from Circe in the Parthenon.

While in Kassel, I received an email from the Documenta organizers inviting visitors to participate in an event a few days hence. Specifically, to read from once-banned books, recite their own texts, perform dance or music, or really most anything that could be done on the building’s platform, but limited to five minutes.

Well, here was my opportunity to hold high the Joycean standard! I submitted a proposal to read from the Circe (or Nighttown) section of Ulysses, which seemed to me adequately offensive. It was this section that the husband of one of Joyce’s typists tried to burn. Our hotel had a business office with internet so I found an online version of the book and was able to print up the few pages I needed.

Circe is composed in the format of a play with named speakers, their speeches and description of the action. I decided to eschew the descriptions and only recite the speeches. When we arrived at the Parthenon, I was given a spot in the center and told when to start. 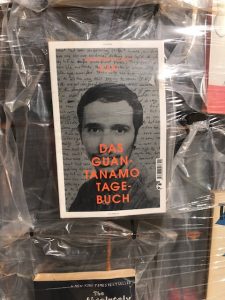 Sprechen Sie Deutsch? This is the book I received as recompense.

There may have been seven people looking at me curiously, and probably not English speakers. We had been told that there was no sound amplification, so I summoned up my university acting training to project my voice. There was no clear front or back so as I alternated between characters I would pivot, rotate, and adjust my delivery.

I particularly enjoyed drawing out the words of The Bawd and Gerty. By the time I finished there were probably two people left paying attention. But the organizers were happy that I actually showed up as some of the promised participants had not. As recompense, I was given one of the wrapped banned books.

For a Canadian in a German city representing the work of an Irish author at an international art event, it was a very cosmopolitan experience!