A Rock to Remember 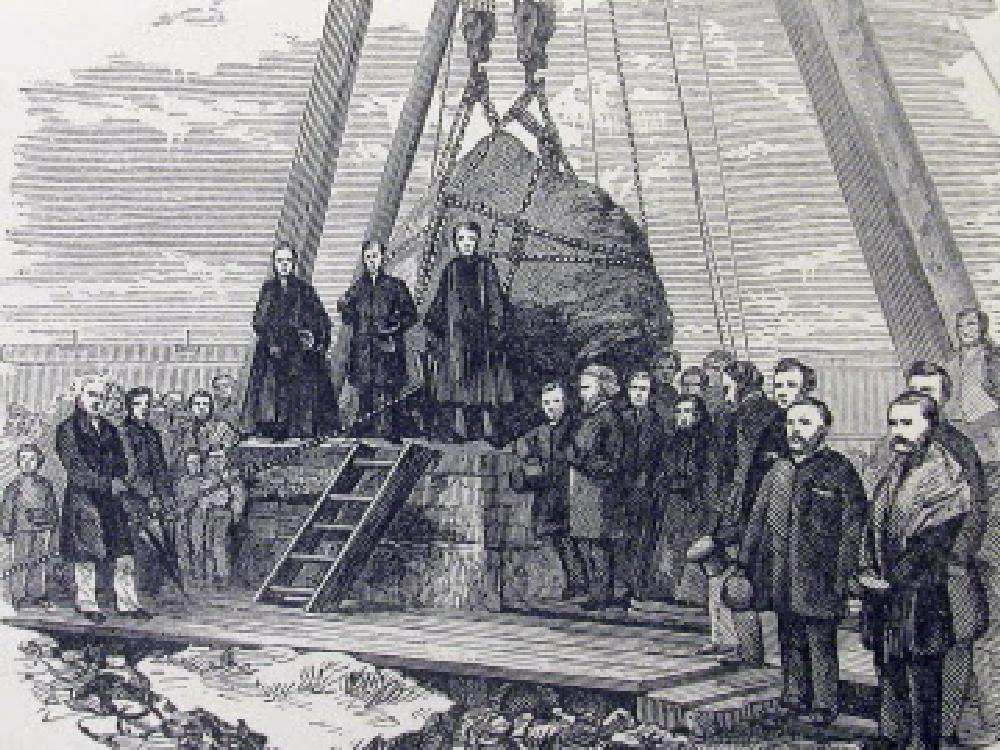 The Celtic cross, a stone cross with a ring surrounding its intersection marked by various Celtic designs and symbols, is what we normally see when we come across an Irish burial ground. But the burial ground that holds 6,000 Irish immigrants who traveled to Montreal during the Famine Immigration is marked by something quite different: a 30 ton black rock.

Located on the Montreal side of the Victoria Bridge, the Irish Commemorative Stone (also known as the Black Rock, the Ship Fever Monument, or the Boulder Stone) commemorates victims that were once quarantined in Montreal’s Fever sheds during the 1847 typhus epidemic. The epidemic arrived with Irish immigrants who came to Montreal in crowded and disease ridden ships that were labelled as Coffin Ships. It is estimated that 3,500 – 6,000 Irish immigrants died during the typhus epidemic after being transferred from Grosse Ile, Quebec to Windmill Point in Montreal. Those who died were then buried in a mass grave where it lay abandoned for years. It wasn’t until 1859 while completing the Victoria Bridge that Irish labourers wished to memorialize their countrymen. They decided to place a large black rock taken from the riverbed of the Saint Lawrence or a nearby field onto the gravesite with the following inscription: To Preserve from Desecration the Remains of 6000 Immigrants Who died of Ship Fever A.D. 1847-48 This Stone is erected by the Workmen of Messrs. Peto, Brassey and Betts Employed in the Construction of the Victoria Bridge A.D. 1859

It wasn’t until 1865 that members of the Ancient Order of Hibernians (AOH), an Irish-Catholic fraternal organization, started holding a private religious ceremony in honour of those who died. Each year on the last Sunday of May, the AOH lead an annual “Walk to the Stone,” that began at St. Gabriel’s Church in Pointe-Saint-Charles to the memorail stone where a wreath is laid and a priest performs a blessing.

Today, the stone still lies on a patch of grass fenced off from traffic that runs on and off the Victoria Bridge. As I interviewed the current president of the AOH Victor Boyle, I find out that the rock actually contains more life than it represents. He explains how important it is to touch the stone because “it’s warm and almost alive and full of spirit.” For the Irish community in Montreal, it would seem that taking part in this annual ceremony is what keeps the spirit of those who lost their lives alive.

Victor mentions that even though the event is a closed ceremony for Hibernians, they welcome the public to take part in the walk and the laying of the wreath. This year, the AOH are hopeful that the ceremony will have an appearance from Montreal’s mayor, Denis Corderre and a definite  appearance from Griffintown’s mayor, Benoit Dorais.

As our conversation continues, I learn that it usually rains on the day of the ceremony: “It’s rained on this day for many years but it reminds us of a good Irish summer day and it’s usually taken in good humour.” Although the ceremony may seem somber, it’s also a day to share the grave’s history and to remind the public of the community’s gratitude during a time of life and death. “It means so much to all those who survived and who were adopted by Montrealers. We’re hoping to show this story to the public with our hope of building a park next March.”

At the moment, the AOH, alongside other members of the Irish and Montreal community, have been working hard to try and get an ok from the city to build a memorial park located 17 feet away from the stone’s original place. Victor explains that the park would be more of a celebration park and not a somber park. He expressed that the park would be family oriented with green space and a GAA field to play Gaelic sports. In addition, the Irish Memorial Stone would be moved into the park with 3 informative pavilions, making the stone and its history much more accessible and known to the public, while allowing them to climb, sit and touch the stone to witness how alive it is for themselves.

This weekend, members of the community will be holding the ceremony on Sunday May 29 after a mass that takes place at 10:30 or 11:00 am (they mention they will confirm the time on their website). The March begins from St. Gabriel’s Church and will end with a great spread at the Irish Embassy pub in downtown Montreal. In addition to the event, there will also be a Montreal Irish Walking Tour on Saturday May 28th starting at the Pointe au Calliere museum where walkers can hear interesting stories concerning the Irish of Montreal. The walk is hosted by Donovan King, the Director of the Montreal Irish Monument Park Foundation, and was actually inspired by Bloomsday! We hope to see you there!

Cost: $15 and email optatif@gmail.com to make a reservation.