Where are Montreal’s Hidden Irish Corners? Take a Walk with Us and See for Yourself! 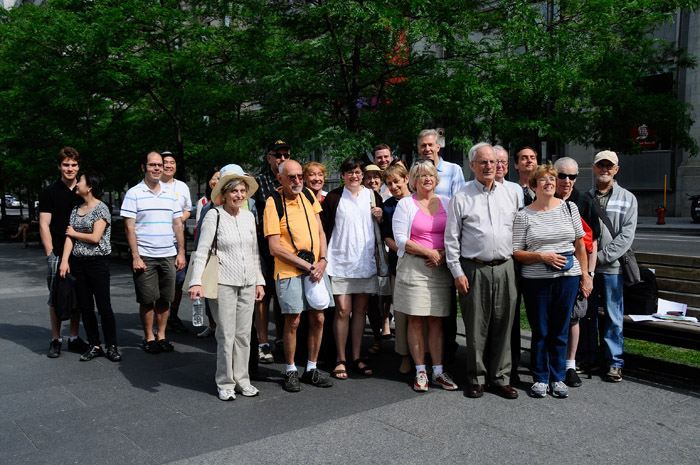 On Sunday morning of June 12th, 2016, Festival Bloomsday Montréal will be hosting their annual Irish Montreal Walking Tour that highlights the past, present and future history of Griffintown and Little Burgundy. We spoke with the tour’s English language guide, Ruth Allan-Rigby, to find out what Montreal’s flâneurs can expect on this year’s trek through the city’s former Irish neighborhoods.

The idea of journeying, wandering, and walking are altogether major motifs in James Joyce’s Ulysses. As a reader of this colossal piece of writing, we follow the wanderings of Leopold Bloom in the streets of Dublin and witness the city’s realities through the protagonist’s eyes. Evidently, Bloom becomes the reader’s tour guide as he gives us a detailed voyage through modern day Dublin. The amount of description provided by the text makes one think of Joyce’s famous quote concerning Ulysses and Ireland’s capital: “I want to give a picture of Dublin so complete that if the city one day simply disappeared from the earth it could be reconstructed out of my book.” Incidentally, walking and walking tours are a major part of Bloomsday as participants retrace the footsteps of Leopold Bloom and Joyce not only in Dublin, but across the globe.

Ruth Allan-Rigby, president of MCLL, will be leading this year’s walking tour in English.

Although Montreal may not have a direct connection with Joyce and his work, the Irish
connection is definitely present throughout Montreal’s streets and neighborhoods—particularly those of Griffintown and Little Burgundy. This year’s Festival Bloomsday Montréal will be introduced by its annual Irish Montreal Walking Tour led by the wonderful Ruth Allan-Rigby. Ruth, who is the current president of the McGill Community of Lifelong Learning (MCLL), has been leading the festival’s walking tours during its previous years. As the city and its neighborhoods are continuously evolving, Ruth hopes to focus not only on the past history of Griffintown and Little Burgundy, but also discuss their current development and the area’s future projects. Focusing on the past, present, and future are what makes her fifth walking tour different from the previous four. Various themes, such as memory, immigration, development, community projects, as well as the similarities between Irish and Black history in Little Burgundy, will be discussed much throughout the walk. As Ruth describes this year’s itinerary, she concludes by saying the walk is still in the works: “every time I walk, I see something different.”

The walk will begin at St. Ann’s Park where the former St Ann’s Church, the heart and soul of Irish Griffintown, once stood. From there, Ruth will guide you through the historical parts of Griffintown—or what is left of it as condos below William Street stamp out much of the area’s Irish identity. The walk will then continue through Little Burgundy and end at Union Church, Canada’s oldest Black congregation, where Ruth will discuss the influence of the church in the Black community. Of course, one can expect to make stops at important locations, such as the urban stable, the Quartier de l’innovation, the Lachine Canal, and the old flour mill in between. We here at Festival Bloomsday Montréal encourage you to reserve your spot now to check them out with us on our walking tour! 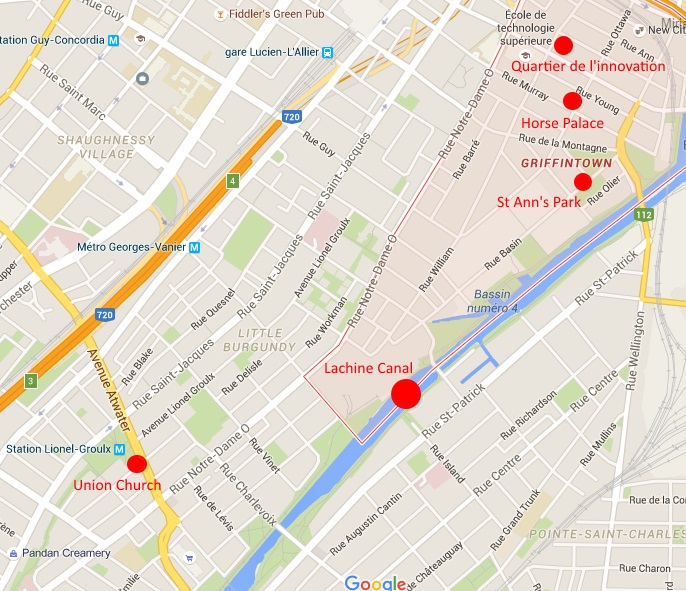 Here are a few of the key locations we’ll be visiting on Sunday June 12th, 2016. As Ruth loves to walk along these parts on her free time, her itinerary keeps adding more locations to the visit on the tour.

As Ruth concludes what to expect this year, she also states how very excited she is to be giving this year’s walking tour: “I love local history in these areas of Montreal and I’m very interested in just how they develop and what reputation they have.” She also explains how so much narrative is added to the tour by some of the participants: “The diversity of the group members also reveals another set of narrative that adds to the discussion of these areas.” In the end, you can expect a fruitful and enjoyable trek as your feet carry you forward through these unique areas of Montreal.

Where: The tour begins in St Ann’s Park in Griffintown (a 12 minute walk from Lucien-L’Allier metro station) and ends at Union Church (1 minute away from Lionel Groulx metro station)

Who: Ruth Allan-Rigby will lead the tour in English. Vivien Freedman will be leading the tour in French.

Reserve your spot here. We look forward to seeing you on our walking tour!