A Week at the Trieste Joyce School 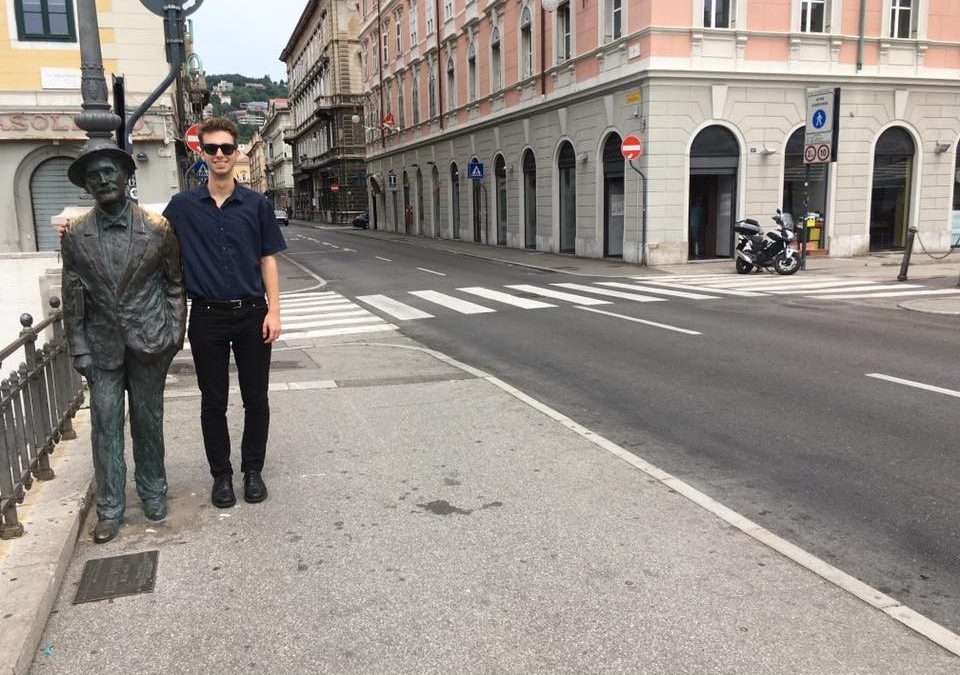 I spent a week studying at the Trieste Joyce School in the summer of 2017 and I loved every minute of the experience. As I took the train into Trieste from Padova my face was glued to the window the entire trip as I watched the Italian landscape unfold and stretch into a tapestry interspersed with contrasting scenes before my eyes. Each station was different from the previous one, and no two stations looked the same. Once I saw the Adriatic, I knew my stop was near. My excitement boiled over as the train traveled closer and closer to the place Joyce called “mia seconda patria.”

Finally, the train stuttered to a stop and I stepped onto the platform under an overcast sky. I had read in Metro — surprisingly, the very same newspaper that is distributed in front of many Montreal metro stations every morning — that rain was forecast but it had held off so far.

I walked out of the train station to the nearest café hauling my black duffle bag on one shoulder and my backpack on the other. It was a hot day despite the clouds, and sweat beaded on my forehead at the thought of having another espresso—but I needed to access Wi-Fi. I had to figure out how to find the way to my residence and I had not planned any other way of getting directions. Luckily, I could see two cafés from the steps of the station. I crossed the street and entered the first one. It was exactly the type of café I was expecting to find: small, friendly, and a local watering hole.

In simple and broken Italian, I ordered an espresso and asked for the Wi-Fi password. After some confusion, I managed to obtain both. I smiled expressively at the barista to make sure my gratitude was not lost in translation and cautiously made my way to a small, round table hugging the front window of the café, making sure to balance the espresso with one hand and my baggage with the other.

Thankfully, the residence was not too far and I had nearly five hours to spare so I decided I would walk there. The city was welcoming and calm and had a je ne sais quoi that made it different from any other place I had visited in Italy. During my stay at the Joyce school, I would come to learn about Trieste’s complex history and the enduring influence of the Austro-Hungarian Empire on the region. This explained, in part, the city’s character. It revealed Trieste’s diversity too, and I began to understand why Joyce was so drawn to it.

In a letter to his wife Nora, from Dublin in 1909, he called Trieste “La nostra bella,” or our beautiful Trieste. Again, in the same year, Joyce wrote in another letter:

“Oh how I shall enjoy the journey back! Every station will be bringing me nearer to my soul’s peace. O how I shall feel when I see the castle of Miramar among the trees and the long yellow quays of Trieste! Why is it I am destined to look so many times in my life with my eyes of longing on Trieste?”

After all, Joyce was interested in the mundane and in teasing the extraordinary out of the ordinary, and Trieste offered opportunities for both. The buzz of voices on the street have a musicality, because, although Triestino is Italian, it is inflected with other languages that were spoken across the Austro-Hungarian Empire, unlike many other Italian dialects.

The influence of Triestino on Finnegans Wake becomes immediately obvious once one hears the playfulness and odd harmony of the language. Though Trieste is now part of Italy, it remains different. For example, many restaurants list sauerkraut with wurst as a traditional Trieste dish, which is something you would not find on very many menus around Italy.

Moreover, the city has only one Catholic Church and it is not located in the piazza. Instead, the piazza Unità gives onto the Adriatic Sea and is populated by municipal buildings showing architectural influences from Austria and Hungary. These are only a few of Trieste’s many interesting distinctions.

Nearly ten minutes into my walk, I passed by the statue of James Joyce on the Trieste Bridge. Seeing it, I cracked an ear-wide smile and asked other tourists who were on the bridge if they could take a picture of me with the statue. I had made it to Trieste after all!

As I sat in my residence, waiting for my roommates to arrive and for the opening ceremony to begin, life could not have been better. My roommates filed in one after the other and we all made each other’s acquaintance around the kitchen table. We quickly discovered that everyone shared the same excitement for the upcoming week: Joyce, and literature in general. We talked comfortably until we had to get ready for the ceremony.

All of a sudden, the rain began to fall heavily, with no signs of slowing down. We smiled at each other with disbelief and ran to the Museo Revoltella where the opening ceremony was to take place. We tried fitting under one umbrella but it was no use: we, like many other people there, arrived drenched from head to toe.

The ceremony began a little late to accommodate for the rain, and what a ceremony it was! Dublin’s “Coro Italiano” accompanied by James McCreanor, Ilaria Zanetti and Noel O’Grady treated us to a concert that included some of Joyce’s favourite songs and some of which are found in his works. We also had a message from Maria Sheehy of the Irish Embassy to Italy, and had some of the international participants read translations of Giacomo Joyce in their respective languages.

After the ceremony, students, professors, scholars, and singers enthusiastically got to know each other over wine and cheese. Around ten o’clock, most of the participants went back to their residence while those who wanted to continue the celebrations moved to the bar across the street for more drinks. In true Joycean fashion, I decided to remain behind with those who were moving across the street, and got a taste of what the upcoming week would be like: busy days capped off by long nights of socializing over drinks, making friends, telling stories, and exchanging contact information to bounce ideas and papers.

The next morning marked the beginning of my studies. Lectures began at the Museo Revoltella at nine o’clock sharp and that would be the case for the entire week. Lectures would be held at the museum every morning and seminars would take place in the afternoon at l’Università degli Studi di Trieste. Morning lectures were separated by a coffee break where the café across the street from the museum provided illycafé, croissant, yogurt, and other breakfast foods in exchange for a teal square paper stamped with the ensign of the university. Similarly, afternoon lectures were separated by an hour-long lunch. However, lunch would often be spent napping to recover from the night before.

Lectures were enlightening and interesting, ranging from a multitude of different subjects exploring Joyce’s oeuvres from new angles. For example, the week started with Vicki Mahaffey’s lecture on “Female Adultery and Everyday life: Exiles, Ulysses and French Literature,” and moved to John McCourt’s “Si pol? Joyce between Italian and Triestino,” Franca Cavagnoli’s “Orality and aurality in the new Italian translation of A Portrait of the Artist as a Young Man,” Tamara Radak’s “The lingerous longerous book: James Joyce and the long modernist novel,” Fritz Senn’s “Joycean Extras: Events in Language,” and Richard Barlow’s “Joyce and the Celtic World” just to name a few.

Seminars were equally informative and interesting. They consisted of interacting with a single text, closely reading passages to analyze the richness of Joyce’s writing, bringing in scholarly works to open our eyes to the world of Joycean studies, making sense of the references woven into the stories, and a lot of historical contextualization to situate ourselves better vis-à-vis the texts.

I was part of the Dubliners reading group and had the chance to work with Caroline Elbay, a scholar, musician, and Dubliner, with students from all over the globe—Italy, India, Ireland, Singapore, the United States, and Switzerland. This made for interesting readings, interpretations, and ideas about the stories in Dubliners. Moreover, Professor Elbay and other students from Dublin were able to give us accounts of past and present-day Dublin to consider along with the stories. These first-hand personal accounts were helpful because they underscored the accuracy of Dubliners.

Yet, the Joyce Summer School was not only about school. It was also about celebrating Joyce, diversity, the company of other Joyceans, and becoming part of a community. Almost every day we were treated to a dinner, activity, or a guided visit through Trieste or an important historical site.

During our week-long stay, we visited Agriturismo Milič Zagrski, a family-run and completely self-sufficient restaurant near the Slovenia border, enjoyed some of the finest food at Antica Trattoria Suban, where the Pope once ate a meal, had a guided tour of Joyce’s Trieste, visited the symphonic house, had a night of music with Lisa Lambe and Simon Morgan, met with Gerry Stembridge, a famous author, playwright and director, and much more. The balance of work and socializing was perfect and made for an unforgettably fun week.

Unfortunately, our Trieste Joyce School experience ended on Saturday July 1. Everybody shared mixed feelings: on the one hand, we were thrilled with the way the week had gone, yet, on the other hand, we were unhappy to leave Trieste and the friends we had made behind.

After the closing dinner at Antica Tratorria Suban, participants went to Gran Bar Unità—the bar we had visited every single day of the week for one last hoorah. My roommates and other students and I decided to stay up all night to watch the sun rise by the water, the way we believed Joyce might have done. Despite the fatigue, it was the best way to make the most of the time we had left with each other and Trieste.

All in all, it was an incredible learning experience that allowed me to understand Joyce better, and in turn, enjoy his work more thoroughly. Trieste and the Joyce School added depth to my understanding of Joyce and motivated me to continue in my research. I am especially happy and grateful to have been part of this wonderful experience because it allowed me to meet other Joyceans and join the family.

The whole event was a great big celebration of diversity and equality, and also a platform for people from different parts of the world to connect and learn about one another while having fun. All I can say is that I hope to bring back what I have learned, to cultivate the friendships and contacts I have made, and to one day go back as a lecturer!