Celebrating 100 Years of Independence with The Bloody Irish! – A Unique Film Screening of the Musical on the 1916 Rising 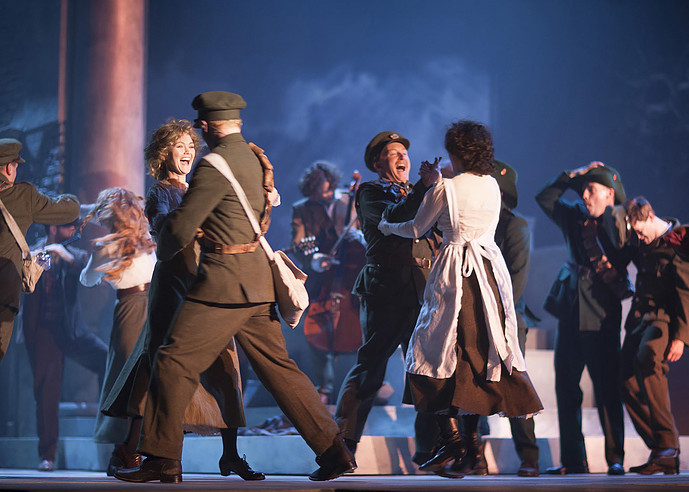 Dancing amidst the shelling, a scene from the musical, The Bloody Irish! Courtesy of thebloodyirish.com

On June 13th, join Festival Bloomsday Montréal for the unique screening of The Bloody Irish! at Cinéma du Parc to celebrate the centenary of the 1916 Easter Rising. The film is a musical performed in front of a live audience in Dublin and is based on the historical events that occurred 100 years ago. It’s a great opportunity to familiarize yourself with one of Ireland’s most important historical moments while enjoying its impressive soundtrack and familiar songs of the time. We will also be holding a Q&A with the event’s host, Gus O’Gorman, who told us what to expect and why you should take a seat with us on Monday night.

2016 marks the centenary of two important events in Ireland’s history: the Easter Rising and the publication of Joyce’s Portrait of the Artist as a Young Man. Noting the correlation between the two and their declaration for independence, Festival Bloomsday Montréal will be honouring the 100 year anniversary with a screening of the film The Bloody Irish!

As part of the centenary’s celebration abroad in the US, The Bloody Irish! was first featured on PBS in 2015 and was performed as a Broadway show in the Neil Simon Theater for two weeks this past April. Written by Barry Devlin, directed for the stage by Michael Barker-Caven, and featuring music composed and arranged by David Downes, the 80 minute production tells the story of the Rising from the perspective of General Sir John Grenfell Maxwell—the British General who signed the death warrants of the seven condemned leaders.

In fact as our host Gus O’Gorman mentioned, The Bloody Irish! should be in quotes because that’s how the British often described them: “The British General’s character comes through, like a ghost, and describes the Bloody Irish to be terrible and all that. But we also have the important historical characters involved, such as Connolly and Pearse.” Important figures involved in the Rising—such as Elizabeth O’Farrell played by Lisa Lambe, James Connolly played by Lorcan Cranitch, and Patrick Pearse played by Gavin O’Connor—all deliver the tale of how they risked their lives for Irish independence in the setting of the General Post Office (GPO). And as this film is a musical, you can expect to hear familiar Irish songs such as “Rocky Road to Dublin” and “It’s a Long Way to Tipperary.” “The whole thing is well done in the sense of musicality,” Gus says. “There are 1-2 songs in Irish and they’re good Irish songs. Not bar baritones.”

However, The Bloody Irish! is not the familiar take we’re used to getting on the topic of the 1916 Rising. According to Barry Devlin, the musical’s purpose is not to rewrite Irish history but to try and make a distinction from the standard narrative we’re used to hearing. Gus also comments on this particular distinction: “This year, there’s a lot of commentary and we wonder, will the revisionists take over? Will it all be neutralized?” In response to his own question, Gus concludes that the centenary will celebrate it instead: “we’re gonna celebrate this thing and it’s a very inclusive celebration. It’s admirable because it was a small group of people where, 100 years later, made a whole nation happy. People are proud that [the Rising] worked out, in my opinion”

Gus, who grew up in Galway and went to school only 100 meters away from Nora Barnacle’s home, has been involved with Bloomsday in Montreal even before it became a festival 15 years ago. He will be hosting the Q&A after the film’s screening on Monday evening. When we asked him if he had any final words in regards to the film, he mentioned that “it’s worthwhile sitting in the seat for it.” In the end, you can expect a new take on the 1916 Easter Rising as you watch and listen to the events unfold on the screen before you.

What: Unique screening of the film The Bloody Irish! a musical performed to a live audience in Dublin with a Q&A.

Where: Montréal Cinéma du Parc (a 9 minute walk from Place-des-Arts metro station on the green line)

Who: The Q&A will be presented by Gus O’Gorman

Buy your tickets here.  We look forward to seeing you!

For more info on the musical: