The Boaters and Sifters of ALP 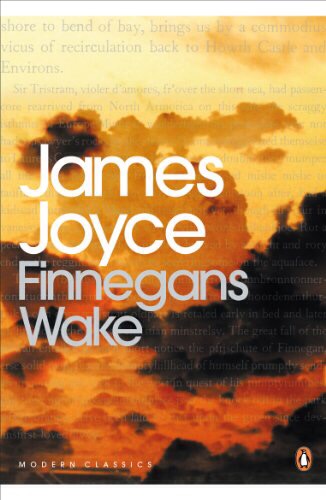 A couple of years ago I saw a movie called The Joycean Society by Dora Garcia. It’s a short documentary about a group of people who have been meeting once a week for thirty years to read James Joyce’s Finnegans Wake. The film excited me and I was so jealous of those people! I wanted to be sitting at that table with them. I wanted to be a scholar.

And apparently I wasn’t the only one who felt this way. About a year later I found out that the folks at Bloomsday Montreal, also inspired by the film, were setting up their own Wake reading group called “The Boaters and Sifters of ALP”. Yes! I was so excited to hear that news.

But after the first meeting I felt so intimidated. I found myself sitting in a room full of academics, artists, and Joycean enthusiasts who were twice my age and ten times smarter than me. I felt like I had nothing to contribute to the group and it was an awful feeling. Earlier that winter, a small group of us students at Concordia had organized our own Wake reading group, but after two months we gave up because the work was so difficult. So as I sat in the Westmount Library, now in my second Wake reading group, I wondered if I would ever be able to be a real scholar, even on an amateur level.

But Finnegans Wake spoke to me in a way no other book ever has. Although I understood very little of the text I could feel my brain expanding and synapses crackled with new electricity. I thought I was just imagining it. But then my dreams became funny too and I started laughing in my sleep.

Take a closer look at the title of the book. Did you notice that there’s no apostrophe in the word “Finnegan,” and what could that mean? It could mean a lot of things. But to me it’s a command from Joyce himself, to us the readers, the Finnegans of the world. We are to wake up in this masterpiece, someway or somehow, to a divine mystery of life that Joyce is revealing in the text. But reading the book is like entering into the rainbow colored world of synesthesia, or the world of an autistic savante. Is it alluring? Definitely. Is it beautiful? Undoubtedly. But is it also intimidating, pedantic, and frustrating? Yes, unfortunately it is. Joyce doesn’t go easy on his readers.

The text is a technicolor dreamscape, yet it’s a familiar story. At its core it’s the story of a family relationship, and love. There’s the guilt-ridden father named HCE, and his wife ALP who serves as the archetypal life-giving mother. They have children, a rainbow daughter named Issy and two sons named Shem the Penman and Shaun the Postman. The narrative takes place at night, in contrast to the daytime narrative of Ulysses. We can be sure of nothing because as readers we can never literally experience the dream state of HCE. Certainly not in the same way we experience the stream of consciousness of Leopold Bloom. But Joyce gets us as close to the dream state experience as he can by mimicking the dreamworld through feats of language and style in textual form.

Still, like The Odyssey the narrative is tied to the water in the incarnation of the river Liffey (and many rivers,) and through ALP. We are Odysseus, we are wanderers, and we struggle to return to Ithaca, riverun, and some deep source of meaning and divine mystery. Reading the book is like going on a voyage, one that transcends time and space. But yes, we can access that great voyage ourselves, indeed we are on that voyage whether we realize it or not, wake up to that fact Joyce insists. We are the boaters and sifters of ALP, and if we arm ourselves with the necessary gear, perhaps we can realize it.

What is that gear? It can come in a variety of forms, but this past year I’ve discovered that reading some of the books that Joyce read in his own lifetime, and the ones specifically referenced and parodied in The Wake, have been the best tools for me. I’ve read Giambattista Vico’s New Science, and The House by the Churchyard by Sheridan Lefanu. I’ve also read the Richard Ellmann biography of Joyce, Nora Barnacle’s biography by Brenda Maddox, and Lucia Joyce’s biography by Carol Loeb Shloss. I constantly reread passages from Ulysses looking for the parallels in it and Finnegans Wake. And in Portrait of the Artist as a Young Man I’ve found many germinations of the ideas that take root and soar in Finnegan’s Wake. But there are many more books to go. As well as the endless supply of Joycean criticisms, explanations, annotations, and every imaginable defense or indictment of The Wake in essays, internet blogs, and scholarly journals.

If this sounds daunting to you, don’t worry about it. If you’re interested in tackling the book, go for it. I’ve persisted with the reading group and have more confidence in my scholarly abilities than I ever thought possible. We meet on the third Wednesday of every month at 7pm at the Westmount public library and you’re more than welcome to pop in and share in the close reading we do. We spend a lot of time on each page trying to tease out the meaning in almost every single word. We wonder about the root language of each word and phrase, their symbolic meanings, and their purpose in the text. We find a lot of double entendres and portmanteau words. As many of us are bilingual we feel we have a unique advantage in understanding at least some of Joyce’s use of the French language. One recent discovery is the joke “un petit, un petit,” which, when you say the words really fast, sounds like the English words “Humpty Dumpty,” a persistent and recurrent theme in the text.

Joyce is an incredibly dense and scholarly writer. But everyone has something to add to the reading group. No comment or observation, and no question is too small for this book. And what’s so wonderful is that you can still make a lot of interesting discoveries and have something fresh to say about the text that’s interesting to everyone in the group.

So, as part of this year’s Bloomsday festival we are inviting you to come on Wednesday June 15th to the Westmount public library at 7pm to try out this book for yourself. Our moderator Kevin Wright, who comes prepared at each meeting with plenty of explanations and insights on the week’s current passage will make you feel right at home in our little reading group. So we hope to see you this Wednesday for another epic reading session of Finnegans Wake.