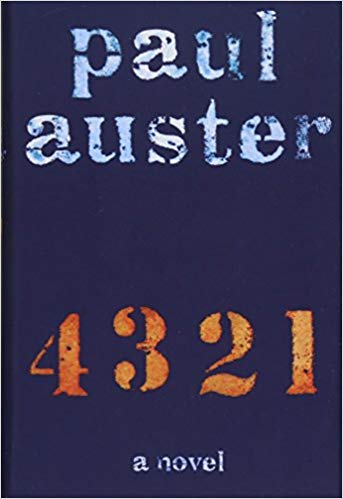 Archie Ferguson: An agenbite-of-inwit boy, for a new generation of readers.

It was by happenstance that I picked up a copy of Paul Auster’s latest novel 4321 (2017) a couple of weeks ago at a McGill University “take a book leave a book” site.

I took the book only because the description on the back cover promised a story so out-there I couldn’t resist:

“On March 3, 1947, in the maternity ward of Beth Israel Hospital in Newark, New Jersey, Archibald Isaac Ferguson, the one and only child of Stanley and Rose Ferguson, is born. From that single beginning, Ferguson’s life will take four simultaneous and independent fictional paths. Four Fergusons made of the same genetic material, four boys who are the same boy, will go on to lead four parallel and entirely different lives.”

As expected from Paul Auster, the novel is hilarious, genius, meta and highly readable.

But what was unexpected was that I found myself reading a re-imagined version of Ulysses.

4321 is a bildungsroman, an epic story of four Jewish-American Archie Fergusons, artists-in-training, with no foreseeable progeny, who grow up (in a state of exile?) in and around New York, and come of age in a time of tumult and political controversy.

At times, Ferguson is reminiscent of Leopold Bloom, at others, of Stephen Dedalus, and at others, he is like the author himself, Paul Auster. A compendium of all three men perhaps, and more; all lovers of Ulysses and Portrait of the Artist as a Young Man are bound to enjoy discovering the parallels.

There are innumerable similarities and references to Joyce throughout the book, so many that it’s hard to pick my favorites, but I especially like this depiction of Ferguson as, “an agenbite-of-inwit boy (meaning, he supposed, that he was too fond of Joyce and all things literary), a bystander, a dilettante, an old fogey, and a lump of shit” (Auster, 724).

New York city, like the Dublin of Ulysses, is mapped; precise addresses are given throughout the novel, and New York’s culture and history define Ferguson’s life. Catalogues abound, as in the great epics like The Odyssey, and I wonder if there isn’t a special significance that there are seven chapters in the novel, each with four passages, rendering a 28-episode cycle, perhaps a nod to the structure of Ulysses?

“How could you not love books after all the books I read while I was pregnant with you?

Ferguson’s mother looked confused. Psychosis? she said. What are we talking about?

The transmigration of souls, Ferguson explained.

Finally, no review of an Auster novel would be complete without mentioning how beautifully meta the book is, and 4321 contains so many engaging and delightful riffs on literature that all book lovers will surely love. I wish I could explain what the title 4321 means, but I can’t without giving away the grand finale. I promise you that it’s worth getting through this tome, if only for the pleasure of reading the last five pages of the book, one ending, in a series of endings, that are each achingly genius and magical. The novel ends with the noun “Happy”, perhaps a response to the most famous “Yes” in literature?

Whether you are a fan of Joyce or not, I highly recommend this book; you will easily rush through it like I did. And I’ll leave you with Auster’s poignant description of the Irish countryside which somehow describes the beingness of the four Fergusons themselves, Ireland/Ferguson as “a green treeless land dotted with gray stones and black rooks flying overhead, a stillness in the heart of all things, even when the heart is beating and the wind has begun to blow” (832).