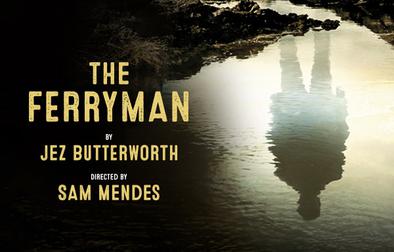 The Ferryman (2017) is set on the 50-acre Irish family farm of Quinn Carney, and tells the story of an extended family celebrating the annual harvest in 1981 (an important year in Ireland’s contemporary history). It is an epic story of love, family and betrayal, exploring the intersection of the politics of the day with the private life of one family on a farm.

The family is a large and extended one — at one point there are twenty two cast members on stage at the same time — and their story is extremely engrossing. Every element, including a few live animals (one honking goose and numerous rabbits), is well choreographed and accommodated by a unique set design by Rob Howell. The three-and-a-half hour long play was written by Jez Butterworth and directed by Sam Mendes, acclaimed director of such films as American Beauty (1999) and Skyfall (2012).

The set has antique beams and time-weathered walls, a staircase leading upstairs, and a variety of knickknacks and pinned-up pictures on the walls — all of which give a sense of the long history of the family that have lived in this home. There is a back door and mudroom from which cast members enter and leave, and a curtained side salon offstage. All the action takes place in the enormous farmhouse kitchen at harvest time in 1981 — when, in stark contrast, ten republican prisoners were starving to death during a hunger strike in the Maze prison. 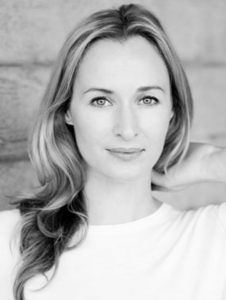 When the actress who plays Mary Carney, the mother, first appeared onstage, my twenty-something theatre companion jabbed me in the ribs and whispered, “Tin Star!”. Tin Star  (2017) is the UK Sky Atlantic television channel’s newly released 10-part drama series and revenge thriller about a British police officer who relocates to Canada to start a new life with his family. His Irish-born wife is played by Genevieve O’Reilly, and the series is filmed in small towns in the Rocky Mountains near Calgary, Alberta. It was exciting for us to find an unexpected connection to Canada in a piece of theatre like The Ferryman.

Unbeknownst to me, Genevieve O’Reilly is a very famous and talented Dubliner and mother-of-two who has also worked in the UK, Australia, Canada and America. While Tin Star and The Ferryman are her most recent works, she has appeared in a variety of interesting pieces, such as The Secret (2016) — a chilling true story about a couple in Northern Island who murdered their spouses — as well as Rogue One (2016), the latest Star Wars film.

What was supposed to be the final performance of The Ferryman took place on October 7th at the sumptuous and ornately columned Gielgud Theatre, located in the heart of London’s West End Theatre District on Shaftesbury Avenue. Due to its massive success and five-star reviews, however, the play’s run has been extended until January 6th. It will likely receive more exposure, perhaps even in Canada in the future. Highly recommended. Watch for Genevieve O’Reilly.