I met my sister in Dublin. We were two Kelley girls getting together in the land of our ancestors for four days of Joyce—my aim—she didn’t know more than the name and my interest. But I never expected to find that the stage version of Ulysses would be on at the Abbey Theatre! The Abbey Theatre about which I had read so much! And there were still a few tickets available for the show that turned out to be one of the best value-for-the-money deals either of us had ever had.

We had seats in the new on-stage seating arrangement. It was almost a theatre in the round with the audience sitting close up to the stage so we felt part of the action as it unfolded. Right in the centre was a ritzy cabaret bar. Directly in front of us was an old brass bedstead with a reclining Molly in her lacy nightgown awaiting her afternoon lover, and meanwhile regaling us with recollections of her past and her life with Poldy. 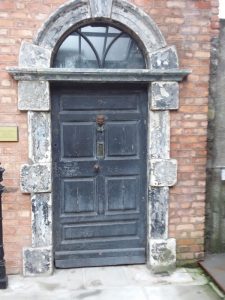 The original door from 7 Eccles Street.

Just to remind you, the Abbey Theatre has always been an arena for art and ideas. It was founded in 1904 as a national theatre for Ireland by W.B. Yeats and Lady Gregory, two revolutionaries who defined the ambition of the theatre: “to bring upon the stage the deeper emotions of Ireland”. And what better work to express such emotions than Ulysses?

Dermot Bolger has produced a brilliantly adapted and vibrant version of Joyce’s classic in a thrilling production for theatre. It’s Ulysses as you’ve never imagined it, a superbly theatrical homage to Joyce’s chronicle of Dublin life, captivating, even for those like my sister who have never even opened the book! Created by Abbey Theatre Director Graham McLaren, this production is absurd, brilliant, and oodles of fun. It brings together live music, puppets, dancing, clowning, bowler hats and kazoos, and manages to extract every chapter of Joyce’s plot, from the emotional (an overshadowing funeral) to the banal (the scene on a toilet).

“My ideal audience,” explains Bolger, “is people who always wanted to read the book but felt daunted. They may be surprised to find that it remains a book about themselves and people they know. They will not leave knowing everything about Joyce, no more than I’ll ever comprehend the fullness of his vision. But I hope they are sufficiently engaged by the human drama; by Bloom’s subtle triumphs; Molly’s all too human contradictions and Stephen’s isolation on the eve of departure, to again start to read this superb chronicle of our capital city: one of the greatest and truest novels of all time.”

My sister resolved to start reading Ulysses as soon as she was home. I shall plod on, equally resolved to finish it one day, and yes, start again!