Trick or Treat? The Awful Disclosures of Maria Monk (1836) 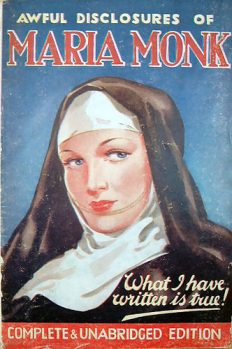 “Mr Bloom turned over idly pages of The Awful Disclosures of Maria Monk, then of Aristotle’s Masterpiece. Crooked botched print. Plates: infants cuddled in a ball in bloodred wombs like livers of slaughtered cows. Lots of them like that at this moment all over the world. All butting with their skulls to get out of it. Child born every minute somewhere. Mrs Purefoy.” (Ulysses)

When it was first published in 1836, The Awful Disclosures of Maria Monk caused a literary and religious storm in Montreal, and abroad. Why? Because the book was purported to be a real account of a young woman’s trials as an ‘inmate’ of Montreal’s Hôtel Dieu nunnery.

In the book, Maria claims that she and the other nuns (‘black nuns’ as she calls them) were systematically raped by the Catholic priests who lived next door to the nunnery. Any child born of these rapes was immediately baptized, strangled, and then buried in the cellar of the nunnery and covered with lime.

Maria also confesses to participating in the murder of a young nun who refused to kill a newborn baby. As a punishment for her disobedience, the nun was forced to lie down, and a mattress was placed on top of her. Priests and the ‘black nuns’ jumped on the mattress until the young nun was crushed to death, and her body was buried in the cellar.

But is the story real, or a publishing hoax?

And who was Maria Monk?

According to her Wikipedia entry, Maria Monk was a Canadian woman born on June 27, 1816. It’s possible that Maria suffered a head injury as a child, and she may have spent some time living in an asylum. A fellow patient in the asylum, with whom Maria may have been friends with, was supposedly a nun. Did Maria receive her ‘source material’ from her?

It’s also claimed in the entry that Maria spent seven years living in a Magdalene asylum. Did she use that experience as a reference for her text? Or was she used by her publisher who hired a ghost writer to pen the book?

Maybe Maria is the book’s author and she was an ‘inmate’ of the nunnery?

As it turns out, Maria’s story was debunked and the book is now considered a hoax. Perhaps this is one of the earlier examples of fake news?

Of course, I read the book because of its appearance in Ulysses. Leopold Bloom gets it for his wife Molly, but she wasn’t too impressed with it, unable to even remember the title:

The Awful Disclosures is not a page-turner by modern standards, but it has its charms. Although it’s hardly salacious, and lacks any detail about the sex crimes, it was still interesting to read about the tediousness of life in a nunnery. Go figure. The most shocking thing to me was that anyone would willingly sign up for a life of unremitting drudgery, constant supervision, and endless prayer and fastidiousness to religious patriarchy.

Upon taking the veil, Maria dies a symbolic death by lying down in a coffin, and from that moment on she has vowed complete obedience to the nunnery, and the male-dominated Catholic church.

Her reward? To be gang raped later that night by three priests. This, with the approval of the Mother Superior.

If you’re interested in browsing through the book yourself, it is available for free at Project Gutenberg, and despite its faults, the content is still relevant and spooky, especially during this time of year.